If you’re wondering, “Haven’t we talked enough about opioids?” The answer is no. When something is responsible for 52,000 plus deaths in one year as reported in an earlier blog — and projected to rise — there is not enough time in the day to talk about it. Not until something changes. That raises a question, though, “Why are opiates so dangerous?”

Cities including Houston are experiencing the Opioid crisis

Cities all over the country, including Houston, Texas, are experiencing a crisis and they are at a loss as to how to handle it. It’s not going away with a snap of the fingers, and it won’t be wished away. Something has to be done—and quickly.

According to The New York Times estimate, more Americans died of drug overdoses in 2016 than died in the entire Vietnam War—the entire war. The Times contacted local and state agencies across the US to come up with a rough estimate. It calculated that 59,000 to 65,000 people died of overdoses last year (2016), with a harder, but likely imprecise, number of 62,497.

The statistics below are from an article in the Chicago Tribune in November 2016.

The article goes on to say that while the overdoses of children ages one to four were accidental, it was still a problem that is related to the opioid epidemic. Those opioid painkillers were only available because someone had received a prescription and neglected to safeguard the drugs. That’s yet another reason why opiates are so dangerous.

”The opioid crisis affects everyone, and we need to pay better attention to the impact it’s had on children,” Gaither (of the Tribune) said. “Our study shows they have suffered hard from this epidemic.”

The rates at which narcotic painkillers have been prescribed have increased dramatically, Gaither said, “so we now have opioids in millions of American homes, and children and teens are exposed to them more frequently.” Opioids have widespread use geographically and through social classes. Use of opiates isn’t restricted to the tough streets of Brooklyn. It shows up just as often in Houston as seen in a recent article, Extremely dangerous drug hits Houston streets.

Synthetic opioid deaths increased in 16 states. New York was hit hardest, with a 135.7% increase from 2014 to 2015. Nearby Connecticut saw a 125.9% increase, and Illinois had a 120% increase in deaths from synthetic opioids.

One of the contributing factors—and one of the reasons opiates are so dangerous—is synthetic fentanyl. All it takes is a dose of fentanyl the size of three grains of sand to kill. The picture below, graciously supplied by Paige Sutherland of the New Hampshire Public Radio. It shows fentanyl, carfentanil, and heroin vials and the amount required of each to kill someone. 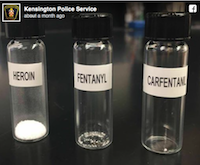 Much of this was hidden in the dark until Prince died from what many now call a “kill pill.” Kill pills are often disguised and passed off as typical opioid painkillers such as Oxycontin, but they are anything but typical. As if Oxycontin isn’t bad enough, the kill pills are laced with fentanyl or carfentanil, a combination almost sure to cause problems; often—as was the case with Prince—more than problems; it caused death.

Prince was famous and wealthy, but that didn’t stop fentanyl from destroying his life—from taking his life.

There Is Good News

What is the good news? Despite the hard facts that opioids/or opiates are so dangerous, if the problem is recognized early enough, help is available. At Into Action Recovery Centers, we are experienced at treating opioid abuse and dealing with problems. We have a competent and medically-trained staff ready to help with whatever you or your loved one need.

We’ve been through this before. We understand the need to treat everyone individually, and we do it confidentially.
We want to help.
Contact us today!